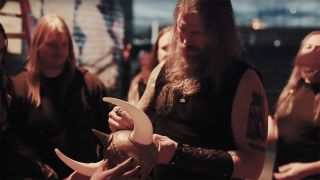 Amon Amarth have shared a making-of video showing how their Berserker video trilogy was created.

The band launched promos for Raven’s Flight, Crack The Sky and Mjolner, Hammer Of Thor, with the Swedish outfit joined by a host of extras on set, along with Josh Barnett as The Berserker, Erick Rowan as Thor, Tess Kielhammer as Demon Boss, Shanie Rusth as Shield Maiden and Canadian WWE legend Viktor, who plays the Demon Henchman.

Watch the behind-the-scenes video below.

Speaking about Berserker, the follow-up to 2016’s Jomsviking, Amon Amarth frontman Johan Hegg said: “For me, this is Amon Amarth 2.0. I think what we've done here is give ourselves the space to explore other parts of our musicality and who we are as a band.

Amon Amarth are currently on tour across Europe in support of their latest album and will return to the the US and Canada for further dates later in the year.

Amon Amarth: Berserker
Amon Amarth released Berserker – the follow-up to 2016's Jomsviking – in May. The album features the singles Raven's Flight, Crack The Sky and Mjolner, Hammer Of Thor.View Deal