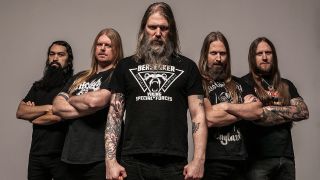 Amon Amarth have released the third and final part of their Berserker video trilogy.

The band previously shared promos for Raven’s Flight and Crack The Sky, with the latest video showcasing their track Mjolner, Hammer Of Thor.

The trilogy features a cast including Josh Barnett as The Berserker, Erick Rowan as Thor, Tess Kielhammer as Demon Boss, Shanie Rusth as Shield Maiden and Canadian WWE legend Viktor, who plays the Demon Henchman.

Speaking about Berserker, the follow-up to 2016’s Jomsviking, Amon Amarth frontman Johan Hegg said: “For me, this is Amon Amarth 2.0. I think what we've done here is give ourselves the space to explore other parts of our musicality and who we are as a band.

Amon Amarth will play at this weekend’s Sweden Rock and will then embark on a run of festival dates throughout the summer, which includes stops at Download UK, Graspop Metal Meeting and Copenhell.

Amon Amarth: Berserker
Amon Amarth released Berserker – the follow-up to 2016's Jomsviking – in May. The album features the singles Raven's Flight, Crack The Sky and Mjolner, Hammer Of Thor.View Deal