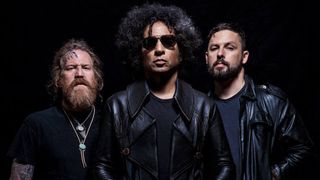 Giraffe Tongue Orchestra have made their track Blood Moon available to stream.

The song is taken from their upcoming album Broken Lines, which will be released on September 22.

DuVall previously said of the album: “Writing lyrics for these songs was somewhat like writing for film – the mood shifts rapidly and drastically within a song.

“Sometimes the whole scene changes. There were a lot of times where, if you were trying to impose conventional rock songwriting standards on this, you’d be in a whole world of trouble.”

Giraffe Tongue Orchestra will make their live debut at Reading and Leeds festivals next month.