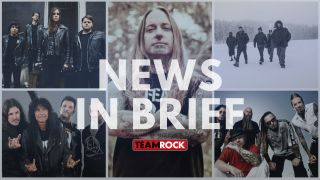 Here is TeamRock’s roundup of all the news snippets from around the world of rock and metal on July 19, 2016. Compiled by our news team at TeamRock HQ. For today’s regular, more in-depth news stories, click the ‘News’ tab in the menu above.

Former Fearless Vampire Killers singer Kier Kemp says he had been unhappy for a year leading up to the band’s split.

FVK called it a day earlier this month when Kemp quit the band, saying they decided it “would be wrong” to continue without him.

Now Kemp has opened up on his reasons for leaving the band, telling Rocksound: “The only analogy I can make that fits how I felt is it was like a romantic relationship coming to an end. It was fucking horrible. Quite often you’ll be unhappy for a while but you don’t really know why in the first stage, then you’ll start to realise something is wrong. Next there will be this sort of denial when you think, ‘No I can make this work’ because you care.

“After that you move on to the point where you think, ‘Actually, I don’t think this is going to work’ and the last stage is it ending. I’d say for the last year I’ve been unhappy, but I didn’t come to a final conclusion until quite soon before I actually did it.

“That’s how I operate, when I realised what I was going to do I made that last bit go pretty quick because dragging it on isn’t good for anyone.”

He adds that he believes other members of the band were also close to walking away before he announced he was leaving.

Pixies have announced a run of six UK winter dates.

The band will perform in London, Leeds, Glasgow, Newcastle and Manchester in November and December on the back of a string of previously announced European shows.

The tour is in support of the Pixies’ upcoming sixth album Head Carrier, due for release on September 30.

Tickets go on general sale at 9am on July 22 (Friday), with a pre-sale available from 9am on July 20 (tomorrow).

Frontman Black Francis recently revealed the album includes a song that is a “thank-you letter” to former bassist Kim Deal, sung by her replacement Paz Lenchantin.

Anthrax have released a video celebrating their 35th anniversary.

The five-minute clip features footage from throughout the band’s career, set to their classic hit Antisocial.

A caption accompanying the video reads: “35 years ago today, the then New York-based thrash/metal band Anthrax was formed and started on the road to help change the history of music.”

Against Me reveal new album details and European tour dates

Against Me have revealed their seventh album Shape Shift With Me will be released on September 16.

The band have also announced a run of European tour dates, kicking off in the UK in December.

One of the album tracks, 333, is available to stream.

Against Me say: “We’re beyond proud to announce our brand new full-length record titled Shape Shift With Me that’ll be released on our own label, Total Treble, on Friday, September 16.

“Written over the past couple of years while on tour, the new album is a collaborative effort that the four of us are extremely excited to share with you.”

Against Me European winter tour dates 2016

Five Finger Death Punch guitarist Zoltan Bathory says he’s looking forward to the band moving on to the “next chapter” in their career.

The band are recording one final album for their label Prospect Park before switching to a new deal with Rise Records. It follows an acrimonious split with Prospect Park, who sued the group over claims they reneged on a contract to record a new album along with a greatest hits package.

Bathory tells 93X: “This is our last record with the label that we’ve been with. We’ve accomplished a lot of great things together, there’s no doubt about it.

“And there’s a next chapter in our lives, and this is what it is. And hopefully it doesn’t become an ugly ex-wife.”

A street in New York city will be named Ramones Way in honour of the iconic punk rock band.

A street in the Forest Hill area of Queens will be given the new name sometime in September or October, according to Joey Ramone’s brother Mickey Leigh.

Leigh says: “Persistence, and patience, paid off. Yesterday, I received a call informing me that the bill was passed approving a street in front of Forest Hills High School be renamed Ramones Way.

A 40th anniversary version of the Ramones’ self-titled debut album is released on September 9.

Devildriver mainman Dez Fafara says the title for the band’s latest album was inspired by a sticker on his fridge.

Their seventh album was called Trust No One and was issued earlier this year. But Fafara reveals a sticker in his home had him toying with the idea for a different title.

He tells Full Metal Jackie: “I raised my children with a huge sticker on the refrigerator for a long time saying Question Authority. And Trust No One is basically along those lines.

“I have had some monumental fallouts over the years with some people, both personal and in business.”