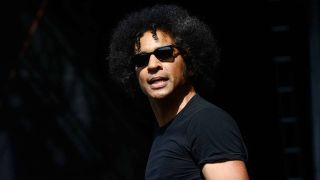 Alice In Chains singer William DuVall has been revealed as the frontman for supergroup Giraffe Tongue Orchestra.

The band created by The Dillinger Escape Plan‘s Ben Weinman and Mastodon‘s Brent Hinds have worked with a number of vocalists and last year announced Juliette Lewis had been guesting on some songs.

Now guitarist Weinman says DuVall is the man on the mic as the band work on their upcoming debut album.

He tells Riffing With Christina (via Loudwire): “Juliette is actually not our main singer. She guested. But me and her have been working on songs, some of which are for Giraffe Tongue, some of which were just jams that we were working on.

“And she did some cool vocals on some of the GTO stuff. Actually, William from Alice In Chains is who has been singing with us.”

On the writing process for the as-yet-untitled record, Weinman adds: “Most of the music was written before William got involved. But everybody is definitely in this band, it’s a real democracy.

“It’s a little different for me, it’s been great. Because Dillinger has obviously been my baby since the beginning. You know while everyone contributes, it has always been my vision and baby.

“So with GTO it’s really a combination of all the elements, all the pieces. So it’s really interesting, it’s been great for me to collaborate like that. And I think when you hear it, it really does sound like all of us in one band somehow.”