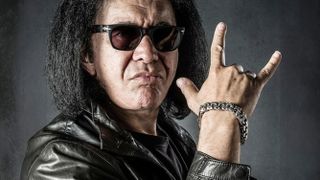 Gene Simmons has withdrawn his application to trademark the devil horns hand gesture used by rock and metal fans all over the world.

Last week, it came to light that the Kiss star had filed an application to brand an action described as consisting “of a hand gesture with the index and small fingers extended upward and the thumb extended perpendicular.”

That drew criticism from Ronnie James Dio’s widow Wendy and Coven’s Esther “Jinx” Dawson who both slammed the Kiss star saying the gesture was in the public domain.

Now, the original papers filed at US Patent and Trademark Office have been updated and say that Simmons’ claim has been abandoned.

The Hollywood Reporter originally said that the bassist and vocalist claimed he first used the hand gesture in November, 1974, during the band’s Hotter Than Hell tour.

But Simmons told issue 196 of Classic Rock that he got the inspiration for the devil horns from Spider-Man and the way he shoots webs from his wrists.

When asked if it was Ronnie James Dio who actually started it, Simmons replied: “Well, I’ve heard Ronnie say that to my face and I said, ‘God bless you.’ I mean him no ill will, but I think he’s wrong.

“Mine came from Spider-Man doing his hand signal, as a homage to him. If you see me in photos, I’m sticking out my thumb. That’s the sign in sign language which means ‘I love you.’”

Former Motley Crue bassist Nikki Sixx added a bit of humour to the debate last week by tweeting that he was thinking of registering the ‘middle finger’ gesture.