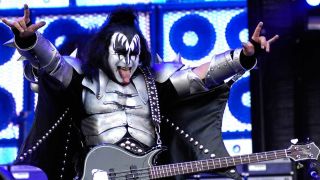 Ronnie James Dio’s widow Wendy has slammed Gene Simmons for attempting to trademark the famous devil horns hand sign which is used by rock and metal fans all over the world.

It was revealed earlier this week that the Kiss bassist and vocalist had filed an application at the US Patent and Trademark Office to register a gesture “with the index and small fingers extended upward and the thumb extended perpendicular.”

The late Ronnie James Dio is widely credited with popularising a different version devil horns sign which he learned from his grandmother as a way to ward off evil – and when asked what she thinks of Simmons’ plan, Wendy says it’s “disgusting.”

She tells The Wrap: “To try to make money off of something like this is disgusting. It belongs to everyone – it doesn’t belong to anyone. It’s a public domain, it shouldn’t be trademarked.”

Wendy compares Simmons’ plan to trying to trademark the peace sign and adds: “It’s laughable, I think, quite honestly. I think he’s made a complete fool of himself.”

She says: “I did the sign of the horns when Coven started in late 1967. I never trademarked my sign because it was meant for all to do, although it is legally ‘grandfathered in’ to me for use in music by all the history.

“Gene does not even do the sign properly. He is doing the deaf sign for ‘love’. If he dares to go through with his application, I shall sue on behalf of us all.”

Former Motley Crue bassist Nikki Sixx added a bit of humour to the debate by tweeting that he was thinking of registering the ‘middle finger’ gesture.