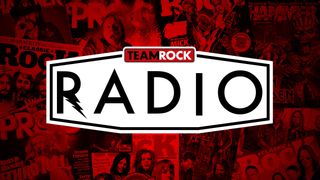 Today, we plugged in the leads, turned up the dials, switched on the red light above the door that says ‘LIVE’ and made noise come out of speakers all over the world. TeamRock Radio is back. Today is just music – just a long playlist. Tomorrow (Friday, June 9 at 10am, UK time), programming starts again.

What can you expect? Artist-led radio: shows where the bands and artists you love choose the music. Weekly Classic Rock, Metal Hammer and Prog magazine shows, presented by the Editors. A playlist that treats you like the rock fan you are – someone who knows what they’re talking about, and plays you songs you want to hear, not the obvious well-worn classics that other stations have been boring you with for years now. A weekly playlist of new music chosen by the… team. We hope you like it. We hope you’ll help us make it great. But we’ll get to that soon enough.

There’s an elephant in the room.

Yesterday we changed the picture on the TeamRock Radio Facebook page and got one immediate comment: “You’re idiots,” it said. “We remember what you did to your employees.”

Fraser Lewry, the Online Editor for Classic Rock, answered quickly: “I’m one of those employees,” he said. “The people you’re annoyed with (the previous owners of TeamRock) have no involvement with TeamRock anymore, in any form.”

In other words: We ARE the people TeamRock fucked over.

The people who used to run TeamRock are gone.

The investment bankers who pulled the plug on TeamRock – and left us all in the lurch just days before Xmas – are off ruining someone else’s lives.

The people who are left – the mag and online teams, the ad sales team, the radio team – ALL worked for TeamRock beforehand. We’ve lost some people and we miss them – but we’re back. And the story is not over.

(In recent weeks, some of the former TeamRock Radio team have launched Primordial Radio. We wish them all the best. If you want to hear Dewsbury and Moose again, lend them your support. They’re not the only former members of the TR Radio team still broadcasting. Some of the team have won a license to broadcast as Rock Radio Scotland. Check out what they’re up to here. Jonny Pirie, who with Dews and Philip Wilding*, was one of the three remaining staff members who actually lost his job in December – does his own stoner/sludge show on MixRadio here. There’s room for all us. We don’t want your money either, just your ears and a bit of understanding.)

So why are we still called TeamRock Radio? There are several reasons, the most obvious of which is that our new owners, Future Plc, bought the TeamRock brand when they bought Classic Rock, Metal Hammer and Prog. Our websites are structured around the TeamRock brand and between them they’re one of the most powerful British online music brands, driving 4 million visits a month with a combined social media following of 4.8m.

Together, it turns out, we really are stronger.

To be honest, a lot of us never liked the name “TeamRock”. (“I felt queasy the moment I heard the name,” a legendary rock writer said recently.) It was a bit cheesy and American-sounding. But we all liked the idea. Rock, metal and prog fans are different from your average music fan. They may three separate tribes but they have a lot in common and our music spills over into each other’s world.

TeamRock is the name for the place where Classic Rock, Metal Hammer and Prog come together (alongside a healthy dose of stuff that doesn’t fit in any of those brands). TeamRock.com should be all the best bits of rock in one place. TeamRock+ is the online membership that brings you all the magazine content in one place.

And TeamRock Radio is the broadcast arm of Classic Rock, Metal Hammer and Prog. The station was always intended to reflect and cover the music the mags and websites wrote about. That never really happened. It will now.

As far as we know, it’s the only radio station in the world run by mag teams. Run by music fans. An algorithm-free zone, with all songs chosen by humans.

The collapse of TeamRock (the company) in December brought out the best in the rock and metal community. You had our backs. We owe you. Consider this payback.

To listen to TeamRock Radio simply click ‘Listen’ on the top right corner of this website for the pop-up player OR download our app OR listen via Tune In OR listen to selected on-demand shows here.

*Philip Wilding, the former producer of the Metal Hammer Show, Spotify’s Metal Hammer In Residence and the host/producer of The Prog Show is our new Programme Controller, as he was in December when TeamRock went bust, though he never got the chance to actually broadcast anything. Philip was part of the original launch team of TeamRock Radio and has a background that includes time on BBC6 Music, TalkSport and Absolute, as well as work on Classic Rock, Metal Hammer and Prog magazines and websites.

TeamRock Radio returns to the air