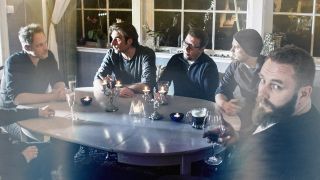 The song is taken from the band's forthcoming new album Soyuz, to be released through Kscope on May 18, The album has a concept surrounding the idea that moments in time cannot be "saved for later". Inspired by the 1967 manned spaceflight with cosmonaut Vladimir Komarov, who perished when the parachute failed to open on re-entering the earth's atmosphere and the descent module crashed into the ground.

“Exit Suite is the cinematic sounding result of a night playing with matches in the studio," Gazpacho founding member and keyboard player Thomas Andersen told Prog. "It is a song about the fear of dawn and the passing of the old day.  The matches were supposed to be our short flickering lives in the dark universe and we ended up making a rhythm out of them and building a song on that rhythm.

"The short film accompanying the song was made by Dewi Allen from the University of South Wales, Cardiff and we loved it. We had lots of ideas on what the film should be like and he had the wisdom to ignore everything we said and do it his way. It’s perfect, speaks for itself and showcases his very special talent."

Gazpacho have announced a string of live European dates, including an appearance at this year's Be Prog! My Friend festival in Barcelona. They will play:

ESP Barcelona Be Prog! My Friend - 30