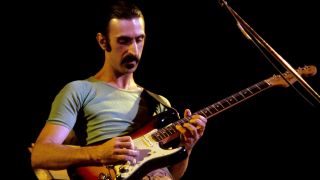 The lineup for the upcoming Frank Zappa hologram tour has been revealed.

The possibility of a live run of shows featuring Zappa, who died in 1993, first came to light in September last year.

Co-trustee of the Zappa Family Trust, Ahmet Zappa, has now confirmed the shows will run under the Bizarre World Of Frank Zappa tour banner and will feature a core lineup of Ray White, Mike Keneally, Scott Thunes, Robert Martin and Joe “Vaultmeister” Travers.

Ahmet Zappa says: “As a futurist, and hologram enthusiast, Frank fearlessly broke through boundary after boundary as an artist and in honouring his indomitable spirit, we’re about to do it again, 25 years after his passing.

“This mind-melting show we’re putting together celebrates the music, often surreal imagery and humour synonymous with Frank. We will be pushing the limits of what anyone has seen holographically on stage before in a live venue.”

He adds: “Circumstances, objects, places and subject matter from Frank’s songs and imagination will be brought to life for the first time on stage. We are anthropomorphising Frank’s music, so his own hand drawn illustrations, classic imagery from his album artwork and characters from his songs can all interact and perform on stage.

“And let’s not forget, Frank himself will be rocking his fans, alongside his bandmates like nobody’s business.

“My father and I actively discussed 3D and ‘holography’ and it was a concept he actively engaged in. He actually devoted half a chapter of his The Real Frank Zappa Book to this subject.

“This is a love letter and a journey celebrating the genius artistry of Frank Zappa. On a personal note, I feel like I am finishing something my father started years ago.”

While dates have still to be finalised, the shows will feature never-before-seen Zappa performance footage from the early 70s, with production company Eyellusion working closely with the Zappa Family Trust.

When the possibility of a Zappa hologram tour was first touted, it drew an angry response from fans.

Adrian Belew, who was initially mentioned as one of the musicians who would take part, later issued a statement stating that he wouldn’t be involved in a “caustic and divisive” tour.

Frank Zappa – A guide to his best albums