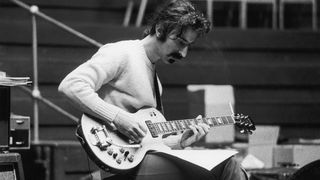 The Zappa Family Trust have announced their intention to take a Frank Zappa hologram tour out on the road later this year and into 2018.

They say they’ve been working with company Eyellusion to produce holograms of Zappa, who died in 1993, so they can give fans “an opportunity to experience the prolific, eclectic and critically acclaimed music legend live in concert again.”

Co-Trustee of the Zappa Family Trust, Ahmet Zappa says: “I’m thrilled that Frank Zappa will finally be going back out on tour playing his most well-known music as well as some rare and unheard material.

“We can’t wait to bring his creative work back to the stage with the musicians he loved to play with, such as Steve Vai, Ian Underwood, Adrian Belew, Arthur Barrow, Vinnie Colaiuta, Scott Thunes, Mike Keneally, Denny Walley, Warren Cuccurullo and Napoleon Murphy Brock among others who are committed to being part of this epic endeavour.

“When I spoke with them, they were excited at the prospect of performing alongside Frank once again and can’t wait to give fans an unforgettable experience.”

Ahmet adds: “Also, how radical would it be to have Moon singing Valley Girl onstage with Frank? Or to see Dweezil side by side with our father playing dueling guitar solos? That would be my greatest wish and I look forward to bringing this special celebration of Frank’s legacy to a town near you.”

Ahmet goes on to say that they are also planning to stage Joe’s Garage The Musical “with none other than Frank Zappa himself starring as the Central Scrutinizer.”

The news comes after Dweezil was involved in a long-running dispute with the Zappa Family Trust over trademarks and music licensing surrounding his performances of his father’s music.

His live show was originally called Zappa Plays Zappa, but he had to change it to Dweezil Zappa Plays Frank Zappa when the ZFT objected.

Many Frank Zappa fans are angry at the proposed plans, making their feelings known on the official Frank Zappa Facebook site and online.

Last night, Dweezil was asked on Twitter if his named had been used in the press release about the hologram tour without his permission. He replied: “You are correct.” Another asked: “I take it you won’t be in the touring band for this farce?” Dweezil again answered: “You are correct.”

Further details on the tour will be revealed in due course.