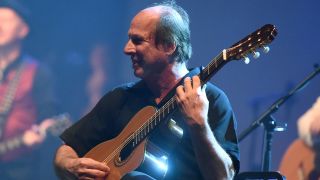 Adrian Belew has issued a statement to say that he won’t take part in the upcoming Frank Zappa hologram tour.

The controversial tour was announced last week by the Zappa Family Trust – with Belew’s name mentioned in the initial press release.

It’s received an angry response from Zappa fans – and from Zappa’s son Dweezil, who this week also distanced himself from the proposed shows and gave an update on his trademark battle with siblings Ahmet and Diva.

Now Belew says: “Here are my final thoughts on the entire Zappa affair: respectfully count me out. I will not be playing Zappa music in the foreseeable future in any situation. This whole thing is far too caustic and divisive.

“I will say I have always admired Dweezil for playing his father’s music and playing it so damn perfectly. I remember time spent with young Moon and how much I really liked her. Recently I met Diva for the first time – she works on Billy Bob Thornton’s tour – and she was very nice to me.

“Though I have yet to meet Ahmet in person, he too has been nice to me – earlier this year he asked me to write liner notes for the upcoming Zappa Halloween box set and he treated me respectfully. I do know one thing: Frank loved his family.

“I have many positive creative things to do. I hope you all will enjoy them. None of them will have anything to do with the current Zappa universe, but I will always revere and love Frank.”

In addition to the hologram tour, the Zappa Family Trust are also planning to stage Joe’s Garage The Musical.