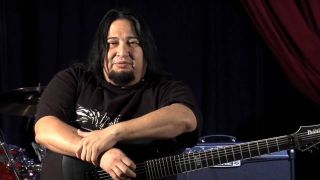 Fear Factory’s Dino Cazares has been urged to perform seated after he tore a muscle in his foot following their show in Melbourne earlier this week.

The guitarist, who’s been told not to put pressure on it for two weeks, will have to perform in a chair at their upcoming gigs in Australia and in South Africa.

The band shared a photo of his injury alongside the caption: “Dave Grohl, we need to borrow your throne” – referring to the guitar-themed seat the Foo Fighters frontman used at their 20th anniversary Washington show last year after he broke his leg falling from the stage at their Gothenburg gig.

Fear Factory are currently on tour in support of their 2015 studio album Genexus. They’ll hit the US and Europe for a run of shows and festivals, including an appearance at Bloodstock in August.