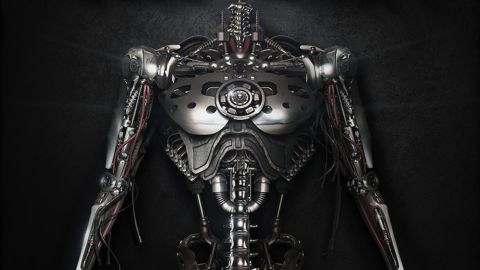 Formed in Los Angeles in 1989, Fear Factory specialise in a sort of cyber-fusion. What they play is essentially heavy metal, with all its pomp and ritual, ceremony and chundering, stentorian, histrionic self-importance. However, it’s metal as if played with bionic limbs, electronically assisted with the devices that always gave industrial music the edge over Marshall stacks.

Genexus represents a continuation, rather than an evolution, for FF. Opener Autonomous Combat System is boosted by a nailgun sequencer attack treatment that features throughout the album. Meanwhile, the relatively conventional motions of Anodized benefit from a slinking, steel spine transplant.

Soul Hacker (‘You’ll never take my soul!’) has its resolution bolstered by a synthetic pulse that is way beyond the capabilities of mere shredding; much of Genexus is probably physically impossible to headbang to.

If there’s a disappointment about Genexus it’s that it only really delivers to hardened FF fans, that it’s essentially more of the same winning formula. It feels like they remain shy as a group of exploring some of the more subtle ambiences and fractured possibilities of industrial music, allowing it to affect their aesthetic sensibility rather than merely act as a kind of superpowering device for old-school metal and its permanently adolescent frame of mind./o:p