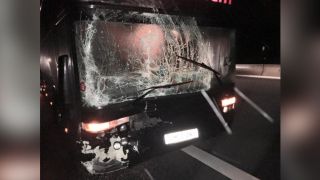 Fear Factory last night escaped a tour bus crash without injury when their vehicle was involved in a road incident in Germany.

They were travelling to tonight’s show in Munich as their European tour in support of latest album Genexus continues.

It follows two more serious crashes in the US last week, where The Ghost Inside’s driver was killed and members of Hinder’s party suffered broken bones.

Fear Factory guitarist Dino Cazares reports: “Everyone is okay, just a little shaken up. It doesn’t help when it’s 4.30am and snowing outside!”

The band have just launched another episode of their tour vlog, covering their visit to Paris in the aftermath of the terrorist attacks. They return to the UK in December.