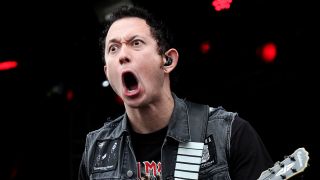 Trivium have admitted they feared for the band’s future when frontman Matt Heafy was forced to steer clear of screaming.

The singer suffered vocal cord damage during a 2014 gig in Columbus, Ohio, and Trivium cancelled a number of shows as a result. Their latest album, 2015’s Silence In The Snow, featured no Heafy screaming vocals.

Bass player Paolo Gregoletto tells Artisan News (via Blabbermouth): “Matt’s voice was toast. He had to re-learn a lot of techniques.

“In my mind, I’m, like, ‘This could change our band forever, if he can’t do that stuff.’ And there was a technique Matt learned, but it was gonna take time, and there was no guarantee that he was gonna get it.

“And now, within the last three or four months, it finally clicked, and Matt is able to do pretty much 99% of the stuff he was doing before. That presents us with the opportunity of going forward with the record. Now we don’t have to worry as much about it.”

As Heafy recovered and learned his new singing technique, performing older songs live was a worry for the band.

Gregoletto adds: “I was definitely a little worried at the time. You have all these songs that people wanna see, and it’s frustrating not to be able to do it, and it’s not Matt’s fault, because the doctors were, like, ‘If you keep doing this, you’re gonna have a problem. It’s not repairable, and then you’re done.’

“And then you can’t hold that against Matt for being in that position. We were doing what we were doing, and you have to make that change. And to do it with a new record coming up, it was definitely a little bit stressful.”

Heafy said last month that the band had a stockpile of songs written for the follow-up to Silence In The Snow. The band play at September’s Ozzfest Meets Knotfest event in California.