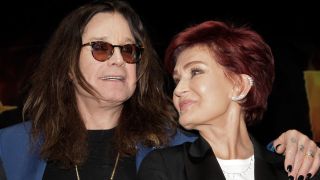 Ozzy and Sharon Osbourne after their split was announced (Image credit: Getty)

Press reports this week stated that Steven Machat – described as Ozzy’s manager before Sharon took over in the early 1980s – believes the pair haven’t really broken up.

Sharon revealed the separation in May, saying that she’d “found this inner strength” to move on, although she still cared about her husband. Later that week they appeared in public together to announce Ozzy’s tie-in festival with Slipknot.

Machat has told RadarOnline: “I would put money on a publicity stunt. They’re on a Black Sabbath tour. She would do this in a minute. It’s propaganda.

“Sharon is clever enough to make a story that the press would read, so all of a sudden he becomes relevant again.”

But Ozzy has responded by saying: “For the record, Mr Machat never managed me, nor was he employed by me in any capacity at any time in my career.

“His representation of this is a categorical lie. I met him when he was hanging around the music industry in the early 80s, but haven’t seen him in at least 30 years. He’s a sad delusional relic from the 80s.”

The band continue their The End world tour, including a headline appearance at the Download festival this weekend. They’re the cover stars of the current edition of Classic Rock, on sale now in print, digital and via TeamRock+.