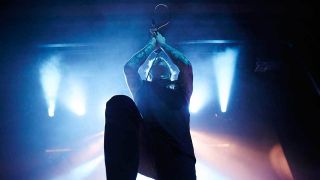 Fresh off a kickass show in London on Sunday, Fear Factory have been announced for the main stage of Bloodstock festival.

But of course that’s not all, the industrial legends will be playing their iconic album Demanufacture in its entirety at Catton Park. “We are pleased that we’ve been invited to play Bloodstock once more,” says vocalist Burton C Bell, “and we are looking forward to dying again this summer.”

Joining Fear Factory on the main stage will be the prog-metal heroes Symphony X in a UK festival exclusive. “Symphony X is honoured to play a festival made by the fans for the fans,” says frontman Russell Allen. “Come with us to the Underworld my brothers and sisters!”

Away from the main stage, reformed thrashbastards Acid Reign have been announced as the first headliner of the Sophie Lancaster stage, closing the Saturday night. Speaking about the headline spot, mainman Howard Smith says “We are all thrilled to be headlining the Sophie Stage this year. I played it in 2012 as a comedian, did a guest spot with Re-Animator last year and all that has served to make me even more keen to finally tread those hallowed boards ‘for real’. It’s things like this that make being in a band worthwhile.”

Bloodstock takes place at Catton Park, Derbyshire, from August 11 to 14.

GET YOUR BLOODSTOCK TICKETS HERE