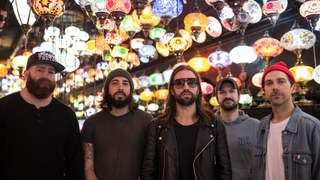 Every Time I Die

Every Time I Die and Letlive have announced a co-headlining Australian tour with support from Counterparts next January.

Rumours were initially sparked after the tour dates were posted on Counterparts’ Facebook and later removed, according to Australian website Music Feeds.

The three bands will also appear at festival Unify Gathering in South Gippsland, Southern Australia on January 13 along with Alexisonfire, I Killed The Prom Queen, Thy Art Is Murder and many more acts.

Letlive say: “You’ve asked us to come back. We heard you. Now we’re going to do so on a co-headline tour with the almighty Every Time I Die – hold for applause.

“We will also have with us the wonderfully talented Canadian hardcore outfit known as Counterparts. All in all, this will be an amazing tour. All that’s left now is you letting us know which shows you’ll be at.”

Every Time I Die launch their eighth album Low Teens on September 23. The album is described as their “most poignant and impassioned album in a career full of sardonic illuminations and pit-inciting fervour.”

Meanwhile, Counterparts recently announced that they’ll trek North America with Parkway Drive and We Came As Romans this autumn. Letlive will also be on the road in Europe until December.

Parkway Drive, We Came As Romans and Counterparts Unbreakable Tour 2016

Road Trippin': Every Time I Die