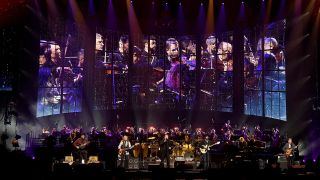 Eagles kicked off their Hotel California tour in style over the weekend with a hit-strewn set at Atlanta’s State Farm Arena.

Don Henley, Joe Walsh, Timothy B. Schmit, Deacon Frey and Vince Gill are on the road performing two nights in each city they visit – and fans in Atlanta got a real treat when the band took to the stage on Friday evening with a 32-song set.

They began by playing their 1976 album Hotel California in full before a second set featuring tracks including Take It Easy, Take It To The Limit, Tequila Sunrise, The Boys of Summer and Heartache Tonight.

They then returned to the stage for four encores in the shape of Rocky Mountain Way, Desperado and The Long Run – ending with a reprise of Hotel California.

Check out the full setlist from Friday evening below.

Eagles next stop on the tour will be in New York later this week, where they’ll play two nights at Madison Square Garden on Friday and Saturday night.

Following the run, the band will head back across the Atlantic for two shows at London’s Wembley Stadium on August 29 and 30 – their only European concerts in 2020.

Last year, Eagles were named as one of the top musical earners of 2019, with the band notching up $100 million.