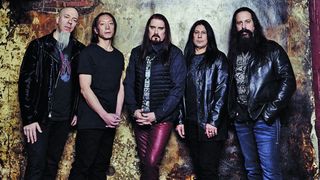 Dream Theater have announced a five-date UK tour for April of next year.

The UK leg of their tour will see Dream Theater celebrating the 25th anniversary of their album Images And Words, which they will perform in full on the dates, alongside a selection of fan favourites.

Dream Theater start the European tour in Rome on January 30 before arriving in the UK on April 18. Tickets are available now.

Dream Theater go behind the scenes of The Astonishing stage show