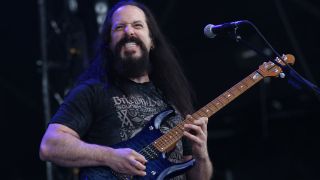 Their 13th title, released in January, explores a dystopian future where the power of music is used to wage war against an evil empire – and the guitarist says it would be “awesome” to introduce the story to a completely new audience.

Petrucci continues: “I think it would fit perfectly adapted as a musical, in the same way that The Who did that successfully with Tommy, and Green Day more recently with American Idiot on Broadway. That would be amazing.

“It’s a whole different world from the rock and metal scene, so it’s a different group of people to have to make those relationships with, but that’s something that we’re pursuing and I would love to see that. I think it would be totally awesome.”

The guitarist previously hinted that the album could be made into a film in future.

He adds: “Because the experience of The Astonishing is an album – it’s not a movie, at least not yet – the music is important to guide the listener and conjure up these images as to what’s happening in the story. The music really acted as a score to us. Hopefully when you’re listening to it, you get this visual.”

Dream Theater will tour Europe in 2017.

How Dream Theater are redefining the concept album