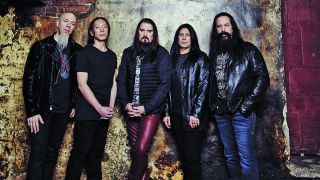 Dream Theater keyboardist Jordan Rudess has given details on the The Astonishing novel.

It’s based on the band’s 13th studio album, which revolves around a dystopian future where the power of music is used to wage war against an evil empire.

Rudess says: “Great news today! The Astonishing is going to be written as a novel. The book will add subplots, new characters, answer questions, and bring along some surprises, too.

“We’re partnering with my good friend Peter Orullian – a very cool cat, who will write The Astonishing, which will come as a limited edition with lots of cool exclusives, including audio clips of songs we didn’t use on the album.”

A statement on Dream Theater’s website adds: “Orullian is currently published by Tor Books, with an ongoing fantasy series in which music plays a key role, making him the perfect writer to adapt The Astonishing.

“Orullian is also a trained vocalist, having studied with David Kyle, and has fronted touring rock and metal bands. This vocal experience has been key in his ability to write central characters in the story with credibility and authenticity.”

The publication is expected in spring 2017, with pre-orders now being taken from the Vault Books website.

Dream Theater will tour Europe in 2017.