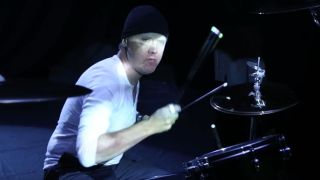 Metallica have released a clip showing the making of their video for Dream No More.

The trash giants produced a video for every song on their new album Hardwired… To Self-Destruct and they are issuing behind-the-scenes looks at each promo.

Discussing his vision for Dream No More, director Tom Kirk says: “I wanted to see the band perform, but I wanted to see them on a person who is trapped inside a dream. So what we’re planning to do is have an actor wearing a complete green screen onesie. So basically he’ll turn into a character that we can comp anything we want onto.

“I want him to be in a dream-like state in lots of different locations where he can’t wake up out of this crazy place and situation. Meanwhile, we’re going to have the band projected on to him. So he’s going to become the performance.”

The ‘Behind The Video’ clip and the actual promo itself can be viewed below.

Tom Kirk also directed the video for Moth Into Flame.

He said: “We’re literally afraid to jam with certain people, because we think we’re not worthy enough. We’re not great musicians.

“Even with those little flutes and stuff I was worried.”

Meanwhile, Spotify have revealed their 2016 listening figures, with Metallica unsurprisingly named as the most streamed artists in the ‘metal’ genre.