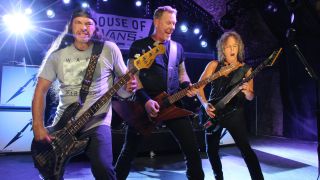 New Metallica album Hardwired… To Self-Destruct has debuted at number one in charts all over the world.

The band today revealed that their 10th album, released this month, is at number one in the Billboard Top 200 in the US after selling 291,266 copies in its first week.

As well as the success in their homeland, the thrash icons are celebrating the record hitting the top of the album charts in Australia, Austria, Belgium, Brazil, Canada, Denmark, Finland, France, Germany, Ireland, Mexico, Netherlands, New Zealand, Norway, Poland and Sweden.

Worldwide, it has so far sold 800,000 copies. In total, the band believe Hardwired… To Self-Destruct is number one in 20 countries. Metallica will reveal the full list this week once all the chart positions have been finalised.

Meanwhile, Metallica have released further live footage from their album launch show at London’s House Of Vans, as well as a behind-the-scenes look at the making of new track Dream No More. Both can be viewed below.

Today, Metallica were announced as headliners for Rock On The Range 2017, alongside Soundgarden and Korn.