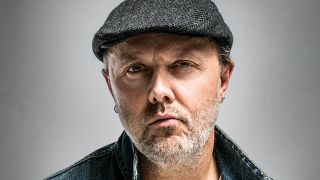 Even in an era where it’s taken them eight years to get a new album out, it seems there is just no such thing as a quiet 12 months in the world of Metallica. That said, 2016 has been by a distance the most important year the band have had in almost a decade, as a brand new album, Hardwired… To Self-Destruct, finally saw the light of day. While the record has been in the works for years now, the recording process was ramped up in 2016 to finally get it out there – and it enabled the band to work on their ever-evolving relationship and realise that, thankfully, it’s only getting more fruitful.

“Within the four bandmembers, especially James and I, there’s a working relationship that continues to blossom,” insists Lars as he reflects on at the year that brought Metallica back to metal’s frontlines. “There’s more trust, and I think we’re all a little more…” He trails off for a moment, before continuing: “With Metallica, there used to be a lot of stuff that was fuelled by negativity. It’s the nature of who we are and where we came from, but there was this cynicism, this scepticism, this controversy. We held each other on very tight leashes, and if someone fucked up, we rained hellfire on all of us.”

If 2016 has taught Lars one thing, it’s that Metallica are, more now than ever, able to bind together and put aside any old grievances for the greater good.

Lars also freely admits that, as bonkers as it might sound to the casual metalhead, Metallica were unsure of their place in the food chain in 2016, and whether a new album would be greeted with the same level of frenzy as they’ve been accustomed to in years gone by. It seems he’s genuinely blown away by the answer to their worries.

“We haven’t done very much this year, but we played two stadium shows that sold out in literally minutes,” he beams humbly. “We’ve also put songs out that have been better received than anything we’ve put out in years. You know, the main difference between now and Death Magnetic nearly a decade ago, is that you pass 50, you don’t know if people are gonna care any more, and yet 50,000 people turn up to fill a new football stadium for you. It’s like, ‘Fuck! This is really cool!’ And it’s not just old classic rock dudes; there’s a bunch of 15-year-olds showing up. I scroll through our social media timelines sometimes and it’s like, ‘There’s 12-year-old girls from Carolina into Metallica? Fuck!’”

Indeed, it seems to be the unending influx of new, young Metallica fans that has impressed Lars the most, disproving the notion that metal is a game for old dudes in denim.

“As the world gets smaller, and social media becomes more instant, and you reach more people on Twitter and Snapchat and all the rest of it, with more and more younger people… it’s pretty crazy. On occasion, I’ll stroll through our Instagram, and half of it is in languages I don’t even recognise! That we have that penetration is pretty cool.”

This year, Metallica have also looked to continue their mantra of working smarter rather than harder, using their status to be able to dip in and out of tours and select shows, to swerve any potential risk of burn-out on the road.

“It means you can get out of the house for a week and just go and get away from the grind of the record or whatever,” Lars explains. “We don’t really ever shut down. Compared to what it used to be like, when you used to be working for two years at 100%, then two years not doing anything, now we’re never in ‘Power Off’ mode, but we don’t really leave the house for much longer than two weeks at a time. When you go out for two weeks, you can see the last show when you leave the house, and that keeps you grounded. At this point in our lives, that’s our best option, trust me.”

One of Metallica’s few shows this year – their set at New York City’s Global Citizen Festival – saw them mixing it up with the likes of Rihanna, Kendrick Lamar and Major Lazer. Not for the first time, Metallica found themselves being, as Lars put it in our cover feature last month, “the weird boys in the room”.

“The guy who runs Global Citizen is an incredible man and so passionate about what he’s doing,” says the drummer. “It’s all these other acts, so for us it’s like, ‘OK, let’s go out there and show them what we can do.’ I think that when we get put in ‘a prove yourselves’ situation, or when we’re still the outsiders, we can step it up. It was an amazing show!”

Ultimately, though, Metallica’s year will be defined by the album, and for Lars, their ability to still connect with an audience on a grass-roots level at this stage of their career.

“I was just telling someone how awesome it is, at 52, to still make records and have all these people care,” he smiles. “We’re appreciative, we float along, it’s all good. There’s very little stuff that winds me up.”