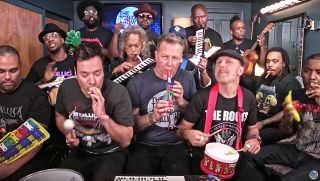 James Hetfield has admitted that Metallica’s doubt about their own playing abilities left them worried about performing Enter Sandman on toy instruments last month.

The band appeared on The Tonight Show Starring Jimmy Fallon to deliver a spoof version of their track in the lead-up to the launch of 10th album Hardwired… To Self-Destruct.

“Even with those little flutes and stuff I was worried. Kirk was practicing the song on this little recording thing. It’s like, ‘Dude, stop practicing it – just go have fun. Go screw it up!’”

He adds: “You’ve got to laugh at yourselves. You’ve got to not take yourself so seriously all the time. The Jimmy Fallon thing showed up in our lap, they said, ‘You want to do this?’ We had a blast.

“Stuff like that is just fun. It lightens your heart and it humbles you as well.”

Comparing the TV appearance to the pressure the band feel on stage, Hetfield reflects: “It’s fun to give each other permission to screw up. You’re not under a microscope.

“‘Don’t be so hard on yourself. If you’re feeling down, look at the other guys, and we’ll carry you through.’

“There’s a freedom to fuck up in Metallica.”

Hardwired… To Self-Destruct is the thrash icons’ sixth chart-topping album in a row. The band continue to add dates to their upcoming WorldWired tour.

The inside story behind Metallica's St Anger