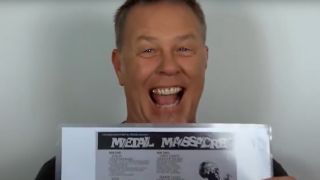 If more proof was needed that Papa Het was a legend, you can add this video to the evidence locker. Germany’s Bild newspaper invited the Metallica frontman to their offices recently to have a flick through their photo album and family pictures. Well, that’s not exactly true, but they did give James a handful of Metallica pics and artefacts from the band’s early years to see what he thinks of them now.

In the below video, Hetfield shares his thoughts on his Lemmy years (just look at that moustache), the first Metal Massacre compilation, and an iconic photo of late bassist Cliff Burton. And, as ever, he does it all with a sense of humour and coolness that nobody can match. Just watch.

Lars Ulrich reflects on the progress Metallica made with Hardwired