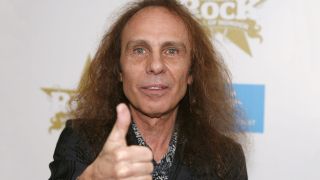 A Decade Of Dio 1983-1993 will be released on July 22 via RRW, featuring artwork by long-time collaborator Marc Sasso.

It includes the records Holy Diver, The Last In Line, Sacred Heart, Dream Evil, Lock Up The Wolves and Strange Highways.

“In 1983, the singer formed his own band, launching a successful solo career that led to 10 studio albums and sales of more than 10 million records around the world.”

A vinyl edition will be launched on October 4, complete with bonus seven-inch single that carries an unreleased version of 1983 track Evil Eyes plus Time To Burn, the only studio track on 1986 live album Intermission.

Dio died of cancer in 2010. His former bandmates Vivian Campbell, Vinny Appice and Jimmy Bain reunited under the title Last In Line two years later. Bain died of cancer in January, just before the release of debut album Heavy Crown.