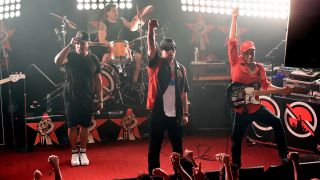 Prophets Of Rage bassist Tim Commerford says the Rage Against The Machine offshoot have the blessing of vocalist Zack de la Rocha, even though he’s not involved.

Commerford tells Rolling Stone: “I spoke to Zack and got his blessing, and that’s really great. We’re a family, and there’s support across the board. I’ve definitely been keeping him in the know.”

He continues: “You’re never going to replace Zack and we aren’t trying to do that. He’s a unique artist and showman.

“It’s going to take people that I know he looks up to. We’re going to plug them in and see what they can do with these songs.

“The songs are needed right now. This is going to be some cool shit.”

Drummer Wilk says of de la Rocha: “I haven’t talked to him recently. I know he’s making a record. I have nothing but love and respect for him – I hope he’s doing well.”

The Prophets Of Rage website includes a mission statement that says: “We can no longer stand on the sidelines of history. Dangerous times demand dangerous songs. It’s time to take the power back.”