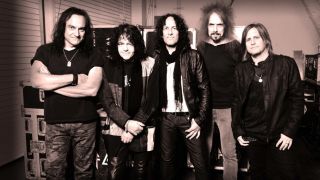 Last In Line will release their debut album in February, they’ve confirmed.

The Dio-inspired group will issue Heavy Crown on February 19, 2016, via Frontiers Music Srl. It was to due to be unveiled earlier this year but was postponed when guitarist Viv Campbell’s cancer returned.

Campbell previously said the album sounds, in places, like early Dio albums. He said: “I would say 50% of the songs would sound right at home on those first three Dio albums, and the others have a bit more of a modern edge to them.”

The band are set to appear on Def Leppard’s Hysteria On The High Seas cruise, due to launch in January.