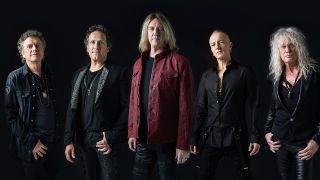 Def Leppard have released a video looking back at their momentous 2019.

It’s been an incredible year for the band, with their induction into The Rock And Roll Hall Of Fame in March, a European tour complete with headline slot at the UK’s Download festival, a summer tour of Canada, and a 12-date Las Vegas residency at Zappos Theater at Planet Hollywood Resort & Casino.

The video crams in some of the year’s highlights and features footage of the band meeting fans, conducting radio and TV interviews, hanging out with Kiss star Paul Stanley and Bon Jovi leader Jon Bon Jovi backstage – and there’s plenty of footage from their live shows, too

And if 2019’s been busy for the UK favourites, 2020 could be even crazier, with guitarist Phil Collen saying last week that “next year’s going to be even more bonkers.”

Why? Well, there’s the rumoured tour with Motley Crue and Poison which could take place next summer, while guitarist Vivian Campbell said in June that he was hopeful Def Leppard could record “two or three songs” and release them in 2020.