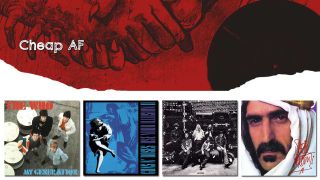 It's not Black Friday yet, but the sales have started: UK retailer recordstore.co.uk has launched one of its occasional price reduction campaigns, and there are plenty of bargains to be had.

There'll be plenty of Black Friday vinyl deals to be had when the day comes, but the Cheap AF Sale launched earlier today, and features titles by The Who, Guns N' Roses, The Allman Brothers, Frank Zappa, Nick Drake, Steely Dan, Kiss, Bryan Adams, Soundgarden, The Rolling Stones and more.

We don't know how long these prices will be available for, but with lots of albums on sale for less than a tenner, we can't imagine it'll be for long.

There are also come heavily discounted box sets up for grabs, including The Rolling Stones' Studio Albums Vinyl Collection 1971-2016, which is currently priced at just £155 (Amazon is currently flogging it for £340, so that's a real discount).

Meanwhile, Metallica's deluxe ...And Justice For All set is priced at just £91 (again, nearly half what it is at Amazon), and there's other boxes available from the likes of Rush, Steve Miller, Public Image Limited and Live, plus coloured vinyl from The Allman Brothers, Lenny Kravitz, Lynyrd Skynyrd and The Moody Blues.

We could go on, but these titles are probably vanishing as quickly as we type. So we won't. Don't forget to check out our guide to the best turntables for your vinyl stash.