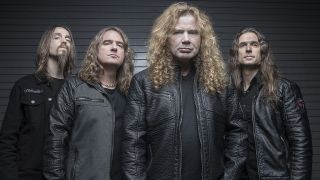 Dave Mustaine has reflected on how he came up with the name Megadeth in a video promoting the new graphic novel Death By Design.

Each chapter of the 350-page book produced by Heavy Metal magazine is based on a different Megadeth track, with Mustaine focusing on their 1988 song Set The World Afire, from their third studio album So Far, So Good… So What!.

He says: “Set The World Afire was the song originally titled Megadeth, and the description I used for the name of the band was from a handbill that was on the floor of the bus I took home.

“I found this piece of paper and flipped it over and it said, ‘The arsenal of Megadeth can’t be written’. I went, ‘Damn straight, I like that,’ and thus started Megadeth.”

Mustaine also goes on to discuss the artwork for the chapter by Diego Agrimbau and Agustín Alessio and talks about the details, especially the striking colours and the shading, calling it “magnificent.”

Death By Design was produced to celebrate Megadeth’s 35th anniversary, with Mustaine previously telling Bleeding Cool: “I have always fantasised about Megadeth doing something this gloriously electrifying and gruesome.

“I hope everyone will enjoy the graphic novel as much as I enjoyed working with Heavy Metal to put it together for you.”

Last month, Megadeth revealed that they’d tour across Europe with Five Finger Death Punch and Bad Wolves, with full details to be announced on September 9.