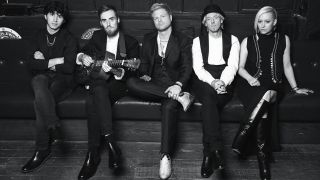 Curse Of Lono – the new band featuring former Hey Negrita frontman Felix Bechtolsheimer – have premiered their video for Just My Head with The Blues.

The London outfit describe their southern rock-based sound as “The Band and the Pixies having a Tupperware party, then Leonard Cohen sets the house on fire.”

Bechtolsheimer tells The Blues: “Some of our music can be quite dark – but as a band we’re far from miserable.

“Just My Head was written in my sleep when I was on holiday. There was a late night of barbecue and drinking, and when I woke up the next morning, I was humming the tune and I had all these words in my head.”

The single can be downloaded via the band’s website, in exchange for an email address.

The track appears on the band’s debut release, due in October. Curse Of Lono play Hackney’s Paper Dress Vintage on June 30 and The Angel’s Old Queen’s Head on July 20.