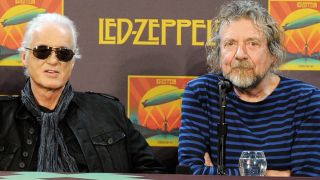 Led Zeppelin’s Robert Plant and Jimmy Page have asked the judge presiding over the Stairway To Heaven trial to halt proceedings and make a decision without consulting the jury.

The case concerns allegations that Led Zeppelin took the opening riff for their 1971 classic from Spirit track Taurus, which had been released three years earlier.

If the Los Angeles hearing is found against them, the estate of late Spirit guitarist Randy California could be entitled to millions of dollars in reparation, plus continued royalties in the future.

But Plant and Page argue, in a motion for judgement as a matter of law, that plaintiff lawyer Francis Malofiy has failed to present sufficient evidence to support his position.

In a deposition to Judge Gary Klausner, the pair argue that even though California’s estate submitted a copy of a 1996 copyright renewal, they “never submitted any copy, certified or otherwise, of the 1967 registration of copyright.”

Their position is that California signed his rights to Taurus away under the terms of his record deal, and therefore, since his estate don’t own the rights, they’re not competent to bring legal action.

They further argue that, despite examining several witnesses including Page, bassist John Paul Jones and surviving members of Spirit, Malofiy had not been able to prove that any member of Led Zeppelin heard Taurus before composing Stairway.

Referring to the alleged similarities between the two songs, Plant and Page say that two expert witnesses had been unable to state that the similarities were not “commonplace,” while their own expert had testified that the descending chord sequence had been in use by musicians for over 300 years.

As a result of these and other points, Led Zeppelin say: “Plantiff rested and failed to carry his burden of proof on multiple issues. Accordingly, judgement should be entered in defendents’ favour.”

They’ve also called for any damages claim to be dismissed even if the case is found against them, saying that Malofiy has failed to establish a realistic settlement figure, because amounts mentioned in court have referred to total band income, and not specifically to income from Stairway To Heaven.

The trial is set to continue today (June 21) if Judge Klausner does not grant the motion. Led Zeppelin will have 10 hours of court time to state their own case. It’s thought that Plant will appear in the witness box if the case proceeds.