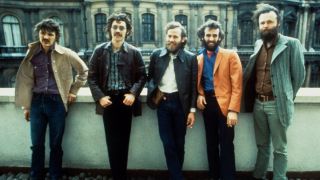 Despite being dominated by Canadians, The Band are perhaps the definitive example of Americana, distilling the idioms of blues, country, folk and R&B into metaphorical music with a timeless reach.

Lead guitarist Robbie Robertson may have been their primary songwriter, but The Band’s collective chemistry made them unique, each of the others - Rick Danko (bass), Garth Hudson (keyboards, brass), Richard Manuel (piano) and Levon Helm (drums) – also a talented vocalist. Nearly 40 years since their initial split, they remain hugely influential…

Robbie Robertson wrote this with Richard Manuel in mind, referring to the latter’s continuing slide into alcoholism. A funky R&B shuffle provides a contrast to the dissolution of Manuel’s vocal, his situation made implicit with the lines, “Out of nine lives I spent seven / Now how in the world do you get to heaven?”

First recorded in upstate New York with Bob Dylan in 1967, and subsequently released on The Basement Tapes, the steady-moving Tears Of Rage found passionate expression in The Band’s revamped version, featuring Richard Manuel’s mournful vocals. As Levon Helm remarked: “Richard sang one of the best performances of his life.”

Contrary to reports, The Band proved they were still a potent proposition with Northern Lights – Southern Cross. Robbie Robertson’s swampy blues licks serve as a delicate backdrop to Rick Danko’s wounded voice, which essays a despairing tale of heartbreak and loss. The ballad builds to a soulful and anguished climax, highlighted by Garth Hudson’s great sax solo.

The title track of The Band’s third album is a semi-autobiographical piece, written by Robbie Robertson, that addresses the nature of performance anxiety in convincing detail. Rick Danko’s squirrely vocal is the perfect vehicle for the conflicted protagonist of the tale, with Garth Hudson’s playful solo as a dancing accompaniment.

One of the less celebrated songs on The Band’s second album, Whispering Pines is a gorgeous evocation of loneliness and disconnection. There are pre-echoes of Brian Wilson’s ‘Til I Die in the wistfulness of the oceanic imagery, with Richard Manuel summoning up one of his most affecting and vulnerable vocal turns.

Told from the viewpoint of a boozy trucker seeking solace with Little Bessie of Louisiana, who drinks, gambles and “dips her doughnut in my tea”, Robbie Robertson’s funky tale is one of The Band’s more droll moments. Garth Hudson’s clavinet is infectious, while only Levon Helm could sing this with such waggish conviction.

Arguably Garth Hudson’s greatest moment in The Band’s recorded history, Chest Fever begins with his appropriation of Bach before settling into the majestic chug that propels the song forward. Solely attributed to Robbie Robertson, there’s no credit for Hudson, while Levon Helm always claimed that he and Richard Manuel improvised the lyrics.

Rick Danko, Levon Helm and Richard Manuel trade verses on Robbie Robertson’s elegiac hymn to the forced expulsion of Canadian farmers from their homeland by the British, during the French and Indian War of the 18th Century. The song is beautifully realised, with intuitive harmonies and a wonderful fiddle cameo by Byron Berline.

An allusive gem, loaded with Biblical imagery and enigmatic souls like Crazy Chester and Miss Moses. Robbie Robertson says the lyrics (inspired by Spanish surrealist filmmaker Luis Buñuel) don’t actually mean a whole lot, though the music is a masterful fusion of gospel and rambling country-blues, with one of The Band’s most recognisable choruses.

As the only Southerner in The Band’s line-up, Levon Helm was perfectly primed to sing Robbie Robertson’s searing Civil War ballad, narrated by Confederate Virgil Caine in the aftermath of defeat. Helm never sounded better as a lead vocalist, evoking pain, regret, dignity and a rebellious sense of stoicism. A vivid masterpiece.

A Metalhead's Guide To... Americana