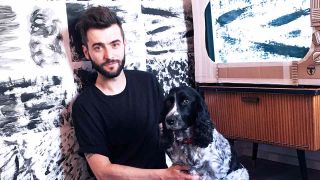 Muti-instrumentalist and Bastille member Charlie Barnes has released a new video for Former Glories. It's taken from his recently released new album Last Night's Glitter, the follow-up to 2018's Oceanography. You can watch the video in full below.

"Album campaigns are supposed to have music videos." explains Barnes. "Historically, I have handed responsibility for those over to my dear friend, life guru, and sometime social media manager Ryan Pearce. Unfortunately we have been living something of a restricted life for the last few months due to a global pandemic.

"In addition to this, my entirely home-made and 100% hit-free new record Last Night’s Glitter has been put together with a budget totalling zero pounds (or Euros…), so when it came to working out how best to go about making a video for one of its songs, my wife and I hatched a plan to advance bravely into modernity, more specifically its preferred aspect ratio of 9:16, easily achieved by way of my mobile telephone. She built a beautiful set in the corner of my home studio, featuring the paintings we’d done for the Last Night’s Glitter lyric video, and a cardboard surround for our old TV, and we set about throwing as much interesting stuff through said TV as we could. Much of what we went for came from my family video archive, so expect some Birthday/Christmas unwrapping gold, a 7 year old’s recreation of Queen’s Crazy Little Thing Called Love music video, and the skateboarding antics of a perpetually fearful teen. And the dog, obviously.”

Recorded and mixed in his home studio, Last Night's Glitter features new stripped-back arrangements of tracks from his aforementioned previous album, as well as 2015's More Stately Mansions, complete with woodwind, brass & string flourishes from the likes of Jonny Abraham & Rittipo (Public Service Broadcasting, Bastille) & more. Closing out the album is a brand new piece, and the record’s title track, a piece of music that Barnes describes as “the kind of song where a writer manages to translate exactly where and who they are at a certain time into a handful of verses.”

“This album, which was supposed to be a couple of throwaway bonus tracks, or a swiftly turned around EP, or a handful of live session videos to help point people, and their wallets, in the direction of its predecessor, has taken me far longer to make than it should have done. So long, in fact, that I no longer see it as a standard issue piece of promotional material, but a body of work that I hope will come to hold its own amongst my repertoire.”