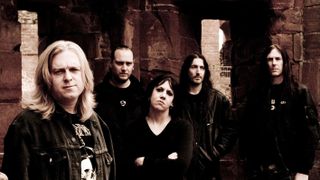 Bolt Thrower have paid tribute to late drummer Martin ‘Kiddie’ Kearns a year on from his death and hinted that they will likely never bring in a replacement.

Kearns died last year at the age of 38. He passed away peacefully in his sleep after taking unwell at rehearsal.

Bolt Thrower say: “On behalf of ourselves and Kiddie’s family, we would like to thank everyone for their thoughts and support over the last 12 months.

“Together with Kiddie’s family we made the conscious decision to keep his unexpected death a private matter, and to take time out to deal with it all.

“When Kiddie joined us back in 1994, although he was only 17, he instantly improved Bolt Thrower as a live band, and no one was more loyal to and prouder to be in Bolt Thrower than him.

“We spent over 20 years together, touring the world, with three different vocalists, but he was so much more than just a drummer to us.

The statement continues: “As for the rest of us, Bolt Thrower has been our way of life for 30 years, never driven by money, fame or ego, but by our own personal principles and values that have guided us through life, and which bonded us as friends long before Bolt Thrower was even formed.”

Bolt Thrower’s statement is signed off with an excerpt from Lord Alfred Tennyson’s poem Ulysses. It reads: “We are not now that strength which in old days moved earth and heaven. that which we are, we are. One equal temper of heroic hearts, made weak by time and fate, but strong in will. To strive, to seek, to find, and not to yield.”