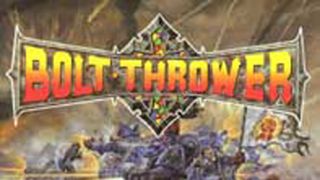 “I've never seen aggression as a problem for British people,” spits Bolt Thrower guitarist Gavin Ward through his teeth. “We can turn it on within five seconds from being really calm to being really fuckin’ angry…”

Mention the music industry and you’ll see what he means: Bolt Thrower have had more than their fair share of problems with record labels in the past. But it hasn’t all been evil corporate scum breathing down the Thrower’s necks: an unlikely supporter back in their earliest days was the late John Peel, who (as any headbanger knows) did much for the cause of British extreme metal and grindcore.

“The first John Peel session we recorded in 1987 was a career high point,” recalls Ward. “He wasn’t at the session, but he brought his family to see us play live with Carcass. We were fucking awful that night…”

What did Peel bring to British extreme metal?

“Without him it would have been a hard slog, because we got signed the day after the session. He must have heard something different on our demo out of the 200 he listened to that weekend. He was a hero to a lot of styles of music, not just metal, of course. He liked [Zimbabwean ensemble] the Bhundu Boys too, remember. But he obviously did a lot for extreme music: the Peel Sessions opened up a lot of things for a lot of us – even just being taken seriously enough to record in good studios.”

‘Taken seriously’ is the key phrase here. For those too young (or senile) to remember, the UK extreme metal scene was a small one even as late as the mid-80s.Napalm Death, Carcass and Bolt Thrower were all pioneering a combination of death metal and hardcore punk by 1987. Like the metallers in San Francisco’s Bay Area in 1982 and 1983, they’d found that mixing metal with hardcore gave it a definite edge.

“The punk scene was the scene we came out of,” Ward remembers. “We used to hang around with The Varukers, and we knew Discharge from our home town [Coventry]. We liked parts of everything: we liked the aggression of punk but the precision wasn’t there, and metal was the opposite. So we liked early Slayer and bits of Metallica – like on RideThe Lightning, when they were a bit rougher. But also Anti-Sect, Discharge and Amebix.”

Until Napalm, Carcass and Bolt Thrower (all signed to the Earache label at one point) times were hard for theBritish mosher looking for homegrown talent outside the relatively moderate parameters established by Maiden, Priest, Sabbath and Motšrhead. Hellbastard, Acid Reign and Sabbat offered a measure of relief, but not much, so when Bolt Thrower came out with their searing debut album, 1988’s In Battle There Is No Law, metallers breathed a sigh of relief. A perfect combination of hardcore punk aggression and metal precision – despite the moderate production values of the day – _Battle… _set the scene for all that followed.

Not that Bolt Thrower made it easy for themselves. Subsequent albums such as Realm Of Chaos (1989) and Warmaster (1990) and others sported garish sleeve art depicting war scenes straight out of 2000AD. The images of barbarian warriors with bulging muscles, dispatching hordes of enemies with massive machine guns or swords, didn’t exactly make the band look sophisticated – why, even their name was taken from a weapon in fantasy role-playing game Warhammer. Everyone plays Dungeons & Dragons once, aged 12, but most of us give it up when puberty strikes.

“Laugh if you want,” retorts Ward, “but those albums sold tons!”

Does he have any reminiscences of the halcyon days of the 1980s, when punk was metal, metal was grindcore and Napalm Death were still regarded as a joke? “Ahh,” he smiles, “We used to play every weekend in England, there were a lot of gigs… [seminal metal tour] Grindcrusher was cool, of course.It was one of the first times that everyone went out on buses with a PA and lights, so we had good sound every night. See, a lot of the American bands at the time were all recording at [legendary Florida studio] Morrisound – especially the death metal bands – so a lot of the productions were getting well similar. Morbid Angel, Obituary, you name it – it was either Tom Morris or Scott Burns who produced it. At least with the British and European bands, we were striving for different styles, even within the same genre.”

Got any career high points, then? “Oh yeah – we toured in Holland with [classic US death metal act] Autopsy, which was a great laugh. We had to pull one of the gigs because our drummer at the time, AndrewWhale, got into a fight. We were driving along and some people started throwing shit at the band, so we jumped out – and obviously a load more of ’em piled round the corner! It was fans from the gig – we ended fighting with our own fans! It was a fucking mess. There were a couple of hospital cases… but they were good days.”

Two decades and eight studio albums down the line and Ward still isn’t satisfied, even though his new record, _T_hose Once Loyal, is a corker. “We’re still trying to make a good album!” he remarks. “You still don’t know if you’ve made the best one – you’re always looking for that.”

They take this metal lark seriously round Bolt Thrower’s house, it appears, with albums taking years to do. “It takes ages!” he sighs. “We’ve been writing for two years, so we had four or fi ve hard drives full of music. There’s enough music in the vaults to last forever. Will we do a box set? Nah, they’re lame, aren’t they? The fans like them but I’m sure the record labels like them more!”

Luckily, Those Once Loyal is a credible return to form. Although Bolt Thrower have slowed down from their original warp-speed blastbeat days (“We were playing fast when everyone else was playing slow,” he says, “but then we realised that you can’t be heavy and fast at the same time.” The crushing riffing of the band’s modern-day incarnation – Karl Willetts on vocals, Barry Thomson and Ward on guitar, Jo Bench on bass and Martin Kearns on drums – makes it a solid modern record. And the sleeve? A toned-down version of the old warfare theme, aiming for the less-is-more approach – to the undoubted disappointment of the old-school fantasy freaks in the Thrower fanbase…

“Where do we want the band to go?” he muses. “We’re already there. A credible band with a small cult following. We got where we wanted to be and now it’s just a question of perfecting what we do. We never toured so much that we got sick of it. Some people say, play every gig like it’s your last: I say the other way – play each one like your first.

“Bolt Thrower is about simplicity, because we’re simple. Black and white.”

Does the record industry still suck as much as ever? He’s off again: “As soon as a scene comes up, what any record label does is sign 20 pieces of shit from it,” he argues. “Roadrunner are on it right now. Metalcore is just about to fuckin’ hit big… they think! So they’ve signed tons of that shit up. But unfortunately they’re moving so fast on their market, it’s like a commercial music style now. You’re either gonna burn it out or have to sift through so much shit in order to hear the good bands.”

Surely the live circuit is still in good hands? “We get offered all the festivals every year, but we usually turn them down,” he grins. “It’s a pleasure to turn down the biggest, isn’t it? Even the biggest can’t acquire us, like: it doesn’t matter how much they offer, and they offer more each time. Bolt Thrower’s not for sale.”

This was published in Metal Hammer issue 148