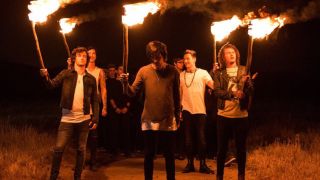 Asking Alexandria have made their cover of Slipknot’s Duality available to stream.

The cover version features on Metal Hammer magazine’s Decades Of Destruction CD, which comes bundled with the 30th anniversary collectors’ edition of the mag. Asking Alexandria’s version of Duality can be streamed below.

On choosing the Slipknot classic for their cover, Asking Alexandria guitarist Ben Bruce says: “Duality was actually quite a difficult choice.

“We love the song but Slipknot have been one of our favourite bands since we were kids, and there are so many songs that we wanted to do.

“It was a huge amount of fun to record Duality and we really hope we did Slipknot and their fans around the world proud.

“The Slipknot guys are friends of ours, so if we fucked up too bad I’m sure I’ll get abuse for years from Corey!”

Asking Alexandria released their fourth album The Black earlier this year. It’s their first with new frontman Denis Stoff, who replaced Danny Worsnop after he left to form We Are Harlot.

Issue 288 of Metal Hammer magazine – the 30th anniversary collectors’ special – is out now in print and via TeamRock+.

Some YouTube users have reported problems playing Asking Alexandria’s cover of Duality. Changing the quality to 480, under the ‘settings’ icon, resolves this issue.