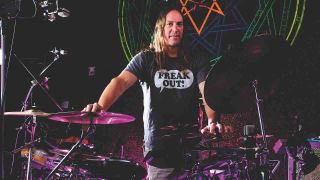 Picking a list of great metal drummers is hard – there are bloody loads of them. Those that made the cut did so not because they’re the fastest or most brutal, but because their playing styles are unique. Arguing over who is best is, like, a metalhead’s favourite thing to do, so with that in mind, and in no particular order, we hereby present to you perfect internet argument fodder. You’re welcome.

No other modern metal band have so successfully combined the technical extremity of metal’s underground with the titanic, grooving heft of mass appeal than Slipknot, and their ex-drummer Joey Jordison had a massive part to play in that. As comfortable blasting as he was creating irresistibly incendiary rhythms of a primal, rousing nature – quite often upside down, he’s the whirling dervish everyone wanted to be at school.

Not content with just being one of the most iconic drummers of his generation, Brann Dailor also writes Mastodon’s lyrics, as well as somehow singing while playing in his instantly recognisable, fill-heavy style. Inspired by the skittishly inventive jazz drummers of old, he does more on a relatively simple kit setup than most with kits so massive they’re evidently compensating for something.

Nicknamed The Atomic Clock for his faultless time-keeping as well as his devastating blasts, there are few drummers the likes of the self-taught Gene Hoglan, who has contributed his fearsome pace and precision to some of metal’s most important acts. Known to practice his double kicks with ankle weights to increase his speed, he somehow manages to hit 150+ bpm in unlaced boots.

Jan Axel Blomberg helped define black metal’s second wave with Mayhem’s De Mysteriis Dom Sathanas, as well as founding avant-black metal space cadets Arcturus; a showcase for his diverse tastes and skills beyond hellacious pace. Three-time winner of the Spellemannprisen, Norway’s equivalent of the Grammy, his contributions in the field of extreme metal drumming are not to be underestimated.

A fearsomely stoic figure, Frost is a black metal true believer, pouring every ounce of that cold hatred into his savage drumming style. Renowned for his burning intensity, he has shown diversity in recent years by adapting to a more measured, pounding pace for Satyricon’s latter day records.

Another player whose inimitable style plays such a huge part in defining his band’s unique sound, Lamb Of God drummer Chris Adler benefitted from the instinctual connection he had with guitarist brother Willie to create some of the tightest grooves in American metal. What happens now he's left the band, though, is anyone's guess.

When it comes to progenitors of the forward-thinking metal, Gojira are way up there, taking progressive death metal to new heights of success with a sound as implacably heavy as it is technically proficient, benefitting from a compositionally quirky flair in their musical phrasing quite unlike any other; a distinguishing feature that Mario Duplantier’s punishing intricacy forms the backbone of.

A redefining talent in progressive death metal, the late, great Reinert contributed to Death’s landmark Human record, alongside guitarist Paul Masvidal, before continuing with Cynic, introducing ethereal melodies and extra-terrestrial influences to death metal on 1993 landmark debut Focus. Before leaving the band in 2015, Reinert’s effortlessly busy style gave the delicate intricacy of Cynic’s songs the unshakeable roots that they needed. His tragic death robbed the world of a stellar talent.

No matter how many bands ape Meshuggah’s obtusely angular groove, they all miss the point; failing to grasp the unpredictably compelling and constantly shifting time signatures of songs written and masterminded by the polyrhythmically inhuman Tomas Haake. Frequently baffling with rhythms that only just about make sense just as they again change time, Meshuggah are the kings of making you look like that one dick on the dancefloor who’s dancing out of time. Hey, we’ve all been there.