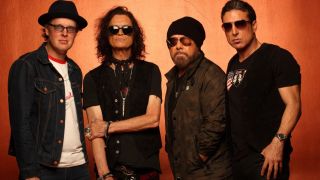 Black Country Communion have released the second part of a documentary series detailing the making of BCCIV. Watch it above.

The album arrives on September 22 via Mascot Records and it’s available for pre-order now. They previously delivered thefirst part of the documentary, and a video for lead track Collide.

Recording sessions took place after frontman Glenn Hughes and guitarist Joe Bonamassa settled the differences that had put the band on hiatus in 2013. They were rejoined by keyboardist Derek Sherinian and drummer Jason Bonham, and work commenced with producer Kevin Shirley.

In the new clip Bonamassa says: “We work at a slightly slower pace with this group than I do with my solo band – just because it is a band. It is five very alpha personalities and it’s Kevin’s job to make a final decision or nudge us in the right direction.

Bonham adds: “He’s the mediator that stops two members from getting into it, because he’ll say it before they have to. He’s the organiser, the encourager, the one to build up your ego, the one to be realistic – and he’s such an accomplished musician as well, which not many people know about Kevin.”

Black Country Communion play two UK shows in 2018 – at the Civic Hall, Wolverhampton, on January 2, and the Hammersmith Apollo, London, on January 4.