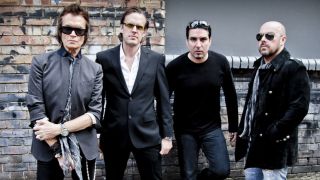 The band split acrimoniously in 2012 after relations broke down between frontman Hughes and guitarist Bonamassa over their differing career priorities.

Now the quartet are set to record a follow-up to third album Afterglow with producer Kevin Shirley, who was also part of the project from the start.

Hughes revealed the news on Facebook, saying: “To quote Joe this morning, ‘maybe it’s time to break out the heavy bats again.’” He later added: “Time is the healer.”

Shirley said: “We’re refurbishing the fuel tanks and refitting the rocket. Getting ready for takeoff in 2017, and I’m fired up. Who’s ready for another dose of BCC?”

Following the split four years ago, Bonamassa continued with his solo career and later hired Sherinian as part of his band. Hughes and Bonham formed short-lived outfit California Breed before both went solo again.

Shirley told Classic Rock in 2012: “I don’t want to come across being negative – I don’t feel that way at all. There will be another record. I would guess we’ll record it in 2015.”