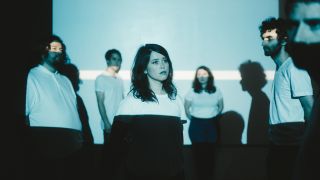 Bent Knee have released a brand new video for Catch A Light. The track is taken for the band's latest album You Know What They Mean, which has just been released through InsideOutMusic. You can watch the video in full below.

"On this album we wanted to do more with less,” synthesiser player and guitarist Vince Welch tells Prog. “For Catch A Light we traded some of the more cerebral forms and rhythms we've used in the past for something more guttural. We're really happy with how director Adam Peditto and producer Katie Dvorak (of The World Is A Beautiful Place & I'm No Longer Afraid To Die) captured this approach in the video as well.

“We were in the best place that we’ve been in,” adds singer and keyboard player Courtney Swain of the new album. “In terms of people and as a group, where I think we learned to pick our battles and just have fun writing this. So this album really portrays us as people, in addition to our music, a lot more than any of our other records. We’re a big group with a lot of different personalities and a lot of voices, but our music brings us together. On the past albums, you could hear the music, but you couldn’t really hear who we are.”

Bent Knee will tour the US later this year with Thank You Scientist and The Tea Club.