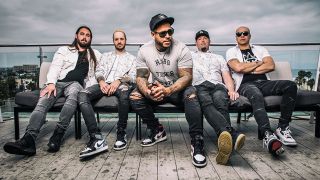 Bad Wolves have released a video for their new single Sober.

“The message is very different from traditional songs that seem to always perpetuate a mentality of self-victimisation, which is exactly the kind of misguided thinking that perpetuates the mental obsessive side of alcoholism and addiction.

“In the end, the moral of the story is about holding on to not giving up on ourselves or the people who are trying – who are really, really trying to make and better themselves.”

Bad Wolves will head out on tour across Europe with Five Finger Death Punch and Megadeth next week. Their first show will take place at Helsinki’s Hartwall Arena on January 20. Find a full list of dates below.

Bad Wolves: N.A.T.I.O.N.
Tommy Vext and Bad Wolves are back with N.A.T.I.O.N., the follow-up to their 2018 album Disobey. The record features the lead tracks I'll Be There, Killing Me Slowly and Sober.View Deal