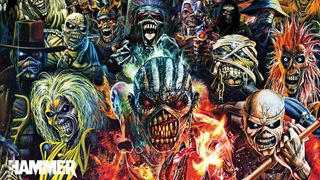 Just look at it. LOOK. AT. IT. A swarm of Eddies are charging into your eyes as Iron Maiden make their grand return to the cover of Metal Hammer. In this world exclusive artwork, we’ve amassed Eddies from all the different eras of Maiden, including some rare ones you might not have seen before. How many can you spot? We’re still counting…

We sit down with Maiden mastermind Steve Harris and talk exclusively about what’s going on in the band right now, what they’ve got planned for their UK invasion and the next album!

And we count down the 50 greatest Iron Maiden songs of all time, as chosen by staff and fans alike! We’ve even got some choice picks from the likes of Metallica, Avenged Sevenfold and Bullet For My Valentine!

Two of the biggest bands in modern metalcore are about to wage war on the UK, so we pitted them against each other to find out what’s going on in the worlds of Parkway Drive and Asking Alexandria. What do they think of each other’s music? Is there a new Asking Alexandria album coming? Who would win in a fight? We find out!

We find out how Royal Thunder’s Mlny Parsonz escaped a religious cult and found solace in rock ‘n’ roll, rebuilding herself through her darkest demons.

Ghost Bath’s leader Nameless reveals why he doesn’t need words to create images of heaven, he can just use the power of a guttural scream. How is this possible and what does it even mean? We dig deep to find out.

After more than a decade, Life Of Agony are releasing a new album in the form of A Place Where There’s No More Pain. Vocalist Mina Caputo opens up to Hammer about her transition from male to female, what it was like in the ‘90s New York scene, and why they’re stronger than ever.

Plus, we revisit the influential German thrash metal scene through Kreator, Sodom and the bands that made it happen, tell the story behind Converge’s truly game-changing Jane Doe album, find out why Stone Sour are channelling hip hop on their new record (seriously, WTF?!), discover the hurtful truth behind Motionless In White’s latest opus, talk to Body Count’s Ice-T about Trump, protest music and the future of our society, reveal the inspiration behind the insanity of underground maniacs Oxbow, and somehow fit in added heavy from Arch Enemy, Twelve Foot Ninja, Northlane, Devin Townsend, Nile, a ton of brand new bands and more metal than you will find in any other magazine in the world. It’s what we do.

And we’ve got a FREE 15-track CD full of the music from hell itself.