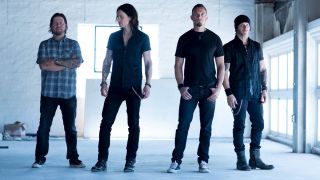 Alter Bridge have released Show Me A Leader, their first single from upcoming album The Last Hero.

It can be heard below and it’s on sale now via digital distributors.

The follow-up to 2014’s Fortress will be launched on October 7 via their new deal with Napalm Records.

Frontman Myles Kennedy says of the track: “Show Me A Leader is a reflection of how polarised and fractured things are in our society.

“This song doesn’t push an agenda – it simply expresses a very common sense of disillusionment people seem to be feeling at this point in time.”

The band recently announced a tour of Europe with Volbeat and Gojira, which begins on November 4 and includes seven UK dates.