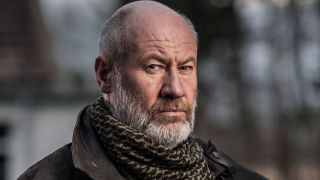 Fish says his last-ever album will have a “dark” vibe as a result of current world events.

The former Marillion frontman is planning to step back from the music business after the release of Weltschmerz in 2017 and a following a run of final tour dates in 2018.

Translated from German, the title means “pain of the world” and Fish tells Prog exactly why he chose the name for his swan song.

He says: “I look on this as a very dark album to finish off with. It will have a similar feel to Clutching At Straws.

“All you have to do is switch on the news and you think, ‘Where the fuck are we going?’ And that seeps down on a personal level.

“I have a daughter who’s 25, and my partner has three kids, 19, 18 and 13. Watching their interaction with the world, I’m finding the crystals in which Weltschmerz is born – the state this planet is in. Not in a political sense, but in a soulful sense.”

As for the future, Fish reports he’d love to get more involved in the film industry – although he states a career in action movies is definitely out of the question.

He continues: “The current dream is I’d love to write and direct my own movie. And acting, too – I’d like to do more. I’ve done film and TV stuff over the years. The highlight for me was playing a nutter in an asylum in 2005’s The Jacket.

“I did one scene with Kris Kristofferson and Daniel Craig. I got such a kick from that. Who knows what’s in the future? But I won’t be doing action movies – my knees and my back are too fucked.”

The full interview with Fish is in the latest edition of Prog, also featuring Jon Anderson, Peter Gabriel, Tiles, Gandalf’s Fist and more. It’s available in print and via TeamRock+.