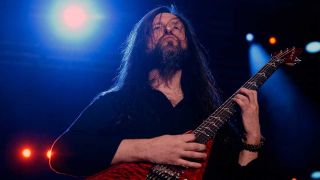 All That Remains guitarist and founding member Oli Herbert has died.

The news was confirmed via a statement on the band's social media accounts earlier today.

"We were devastated to learn that Oli Herbert, our friend, guitar player, and founding member of All That Remains, has passed away," reads the statement on All That Remains' Facebook page.

"Oli was an incredibly talented guitarist and song writer who defined Rock and Metal from the Northeast. His impact on the genres and our lives will continue indefinitely.

"No further details are available at this time. The band and family request that you please respect their privacy and remember Oli by celebrating the great music he made."

All That Remains' are scheduled to tour Europe in December, following the release their new album Victim Of The New Disease on November 9.